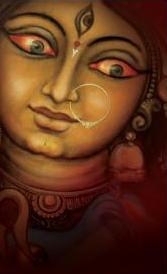 This dance project enables me to investigate movement by incorporating new techniques, style and interactivity by three choreographers from two different countries across the world. The result will comprise a program of three new dances on a shared theme, choreographed by three internationally respected artists: Professor C.V. Chandrasekhar, with whom I have worked previously; and two first-time collaborators, Hari Krishnan and Santosh Nair.

3×3 will focus on three dance movement vocabularies—classical and contemporary Bharatanatyam, and Chhau—and move me closer to the heart of what I do best as an artist: examining pure Indian dance movement  and expression as a soloist. The creative departure point for 3 x 3 will be the Hindu goddess Devi in three of her many incarnations: life-force of the universe, Devi; invisible warrior, Durga and fierce destroyer, Kali.

There are two main phases of 3 x 3: Movement Voices for a Bharatanatyam Dancer. During the first phase, I will study with the three choreographers as they each choreograph a new work with original music, on me. In the second, I will bring the choreographers together to observe my progress and rehearsals of their choreographies in an evaluative research period that will include open studio sessions and “informances.”

Music is the base for choreography, especially in Indian dance forms and for this particular project Praveen D. Rao, a renowned music composer from Bengaluru, India has been commissioned to compose music for each of the three choreographies. Each choreographer will interact with Mr. Rao about the needs and necessities of their piece.

During the second and third week of October 2012, all three choreographers will convene in Philadelphia and review the three dances at my studio. This evaluative and synergetic phase will permit further coaching and feedback. This unusual gathering will permit a cross-genre conversation about dance vocabularies, performance techniques, aesthetics and interpretation. We will evaluate movement sections individually and assess how they may best work together as a 60-minute solo program.

During this period, contemporary choreographer and BodyMindMovement practitioner Mark Taylor will serve as a consultant/observer, and participate—as an “informed outsider”—in the discussions on creative practice with the choreographers and myself.  Taylor has worked on numerous cross-genre choreographic collaborations, including Bharatanatyam. Additionally, he will write about the movement research process and bring fresh perspective to how the four artists see the work, both as discrete dances and as an integrated program. Taylor’s essay will provide an introduction to and differentiate the three movement forms from each other, and it will be used on my website and in program notes to help inform and contextualize audiences’ experience of the work.

This completed choreographic piece will be shown to the general public audience on the 19th of October at Painted Bride Arts Center at 7:00 P.M.